ACL Replacement: continuing to pay the price of radness

As mentioned in my previous post The worst 20 minute bike ride ever..I blew out my knee riding my fixed gear bicycle. I spent the first week not knowing what was wrong. I wasn't bleeding so i didn't go to the Emergency room...that's reasonable, right? It swelled up,  got super stiff, hurt..etc. etc.  I took a week off of work, laid around and iced my leg. It was pretty miserable.

x rays, and and MRI later...sure enough i shredded my ACL.  The arthroscopic scope pictures show two little scallop looking things rather than a ligament.

All of this just emphasizing the fragile nature of the body.  I was getting ready for a ski season one minute, crawling home the next...followed quickly by not being able to do anything, limping...miserable.
This also emphasized the need for being mindful when I go out and try to do something. I suppose nordic walking would not entail much risk and would still be a work out...but I am not sure I am ready to be that kooky yet.

Ruth and the Kids were great through all of this.

Once it was determined that I wanted an ACL, I had to do quite a bit of pre-hab to get my knee ready for surgery.  The biggest issue i had was getting the knee fully extended.  Physical Therapy was great, and my knee made a lot of progress over the next few weeks.   I became really bummed that my knee was going to be taken back to square one...I can certainly see how somebody could continue to ski or skate or run with out an ACL. I read that Steph Davis did this...She however is an incredible athlete and i am only a semi rad midwesterner. And to be honest...my knee was getting better but had a radical instability that made living sucky. 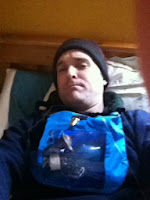 I had Surgery on December 31st 2013....awesome way to bring in the new year.  I took oral pain meds and had a pain pump that was mainlined into a nerve.  A doctor or a nurse could tell you what it was exactly..but the long and short of it was that made the pain very tolerable. The Pain pump lived in the bag pictured above..I had to carry it everywhere...became a drag after a while.

The worst part of surgery was washing my self with the weird soap anti-biotic stuff. bleech!  Once I met the anesthesiologist...everything went really well.  It was a lot like being abducted by aliens...
Over all, the pain of the crash and living with the fucked up knee was far far worse than the pain of my knee post surgery. 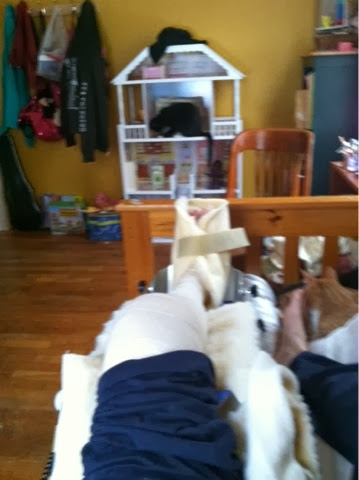 Upon returning home I was immediately stuck into a passive motion machine. This was rad and while i couldn't really feel my leg, moving my leg felt so much better than having it sit still.

For the next four days I didn't move much. I watched a lot of TV and read whole bunch of blogs. I had to live in my daughters room downstairs. I was the favorite spot for the cats to hang out.  Two are here with me in this picture.

Again radness extracts its sacrifice and rewards some more than others.  The blood I shed brought one of the best winters in a decade to Michigan..my diligent training for ski season..my preparation all for naught.
Posted by Unknown at 9:30 PM No comments: