Ok so Feb. and March are shitty months in Michigan for fun.  Not enough snow to ski really, too much slop to skate really.  Here is a Video of a Pirate ship shaped bowl. Pirates, Skateboards, brats and beer. Sounds good to me.
Posted by Unknown at 5:01 PM No comments:

I have grown very fond of the tour of urban decay you can get on the South Shore Line.  Yes, you can get a very similar view from 94 and the Indiana Toll Road but from the train it is much more up close and personal.  With the flat landscape, low skies and peeks of instant horizon from Lake Michigan. Dirty broken concrete, burnt out buildings,  abandoned buildings and wasteland everywhere. You get this in Michigan City too, just complete decay. boarded up windows, burn out roofs,  the detritus from the suburbs of Chicago and small citys of the past.

This is starkly contrasted with the space between Beverly Shores and Ogden Dunes. This area is a bubble of relatively undeveloped land. Considerably more wealthy residents, and a history that is unknown to me has spared this area of the Southern shore of  Lake Michigan from the worst of the steal mill, oil refinery industrialism that is characteristic of this area.

Some of the abandoned buildings are spectacular structures. The Small railroad "cottage" pictured above has always seemed like a great building to me. Even in disrepair it has some allure. The Complex of brick buildings pictured below is just awesome. I have no idea what it was, but what it is now is just begging for something. I expect that this will be torn down at some time, great architecture destroyed for lack of use and love.


After a brilliant snow storm  that gave us such nice skiing snow, we had a thaw. The thaw was long enough to get a few skates in, looked like the runners were happy to have open pavement.

After the thaw,  freezing rain, snow sleet, more freezing rain and then......a nice white coat of snow. about 1 inch of thick powder.  So the ground is encased in ice....over which is a thin veneer of snow.

I am realizing that this is becoming a kalamazoo weather blog.  Fine tuning your fun exploration to the prevailing conditions though.....has some merit.

Thinking that I would like to get a little more skiing in this winter i went down to Angell Field and toured around. The climbs were an exercise in busting through the ice...the downs were alternatively powdery...powdered sugar over ice which led to big slide turns and straight up ice....which required pointing the skis down and hanging on.

Posted by Unknown at 7:41 PM No comments:

In memory of our winter I present the following photograph of native Michigan intelligence.

Through Telemark Tips I have gotten a lot of traffic on this Blog as well as made some new connections with other Michigan skiers - others who tread through the woody back country shaped by Glaciation. Notice the use of multiple car tire rims, what i would assume is salvaged lumber and perhaps a tree stump used as a block on the drivers side back wheel there. This is a sculpture....Detroit may get its Robo-cop statue....i propose something like this to commemorate Michigan's winters.

This photo was accompanied with descriptions a place where the glades are maintained by an enterprising crew, fueled on Shorts Brew and desire for fun.  Looks like you can make multiple runs with out having to climb- just some gas in the Escort wagon. I wonder if the Escort doubles as a warming cabin?
Posted by Unknown at 9:08 AM No comments:

First Skate of 2011 - Henderson Hill and beyond.

Took the Loaded vanguard and big stick out today for a little ride around the neighborhood.  I think that 2011 maybe the year that the Tour of the Kalamazoo Neighborhoods  (TKN) takes place.  If so, one down.  Carved up a lot of fine downhill runs, got some pushing in with the stick to round out the "work out."
School was getting out as the last run was coming in and some kick flip kid (with three pairs of shoes) shows up puts his board down and busts a big ollie. Seeing the Loaded and a Bustin made him pause for a moment...and then continue skating. I will probably see this kid down at the park some day...and he will thrash while i will still be pumping transition.

hay- helmets make you feel safer- or at least they make me feel safer.

a few pictures from our exploits today. 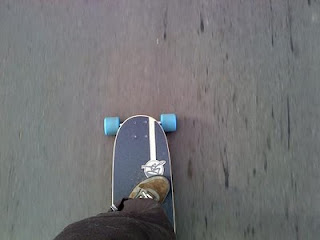 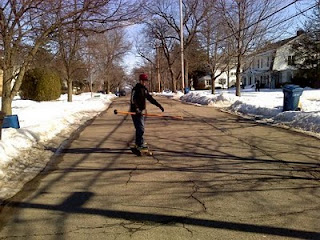 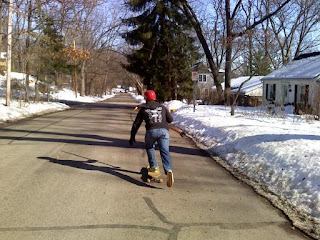 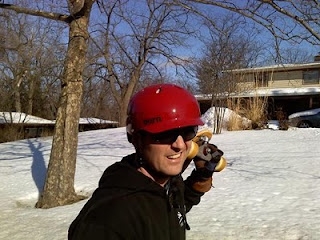 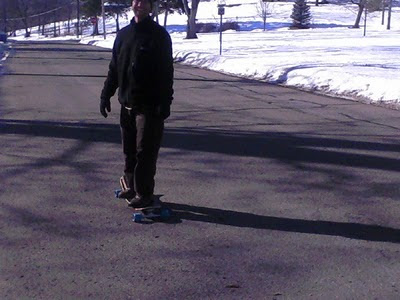 frustration at checker mountain or off piste and pissed off

I was experimenting with wedging the camera between my face and the helmet strap. Here are two views of the same run. One with a crash....and one with out.  This is the first Glade on the South East nose of Checker. Looking at the topo, it is obvious that Mount Checker is not a stand alone formation but part of the long landform that forms a nice ring of hills along the outer edge of plains in the  Kalamazoo Valley.  Parchments hills are also part of this, and if I was skiing better i would want to go over there and explore. An urban assault would probably be excellent, going down those hills- the linked front yards, the linking of turns and dodging of chain link. Trespassing, beauty and danger, what more could you ask for really.


This was just one of many crashes. The run before the crash is pretty nice and certainly gives a different view of essentially the same run as the depicted in the first video. Further up this hill is the eastern summit of Checker.This has some great runs down the North side- steep and open. I crashed on every attempt.  the slope became crisscrossed with climbing tracks rather than being branded with  S and 8.

After this, I attempted to charge back up to give it another go.  I had been having difficulty climbing all afternoon ( improperly waxed ) and ended up sliding backwards, riding a tree, falling down, having my right leg get caught up and as i fall....the tree progressively wedges its self between boot and ski ( so much for the advantage of free heal) and hoisted into the air.  Hoisted on the yard arm of a lower slope of Checker Mountain. The result was bad enough that peter dropped off a beer for me later that night.

The Aftermath of Blizzardzilla- body is shot.

Day one of the blizzard was covered in an earlier post. This includes rare audio from NOAA documenting the on coming storm.  The picture above is the only surviving documentation from the ski assault of the West Main Hill Neighborhood.  Regrets from this excursion is that I was too tired to attempt to ski Hilbert street.
west main hill
This whole neighborhood is part of a larger series of hills cut out of glacial left overs by water- basically the western high bluffs off the Kalamazoo river. Or at least that is what it seems like to me.
The next few days included getting some more skiing in, doing a lot of shoveling...and work (always getting in the way)
The Weekend  allowed me to go the Dexter/Ann Arbor area for some skiing and curling.  I did not take a single picture of a short morning tour for turns on by the Peach Mountain observatory. This area is a favorite with back country XC skiers, and as it turns out some telemarkers as well.  We had shin and knee deep powder, openish runs....but had to share them with a couple of other fellas in plastic boots etc.

After the ski, on to the Dexter Ann Arbor Curling Club sheet. Not surprisingly the boys and girls have improved greatly and the DIY stones have taken a beating.

Meanwhile back in kalamazoo the annual FTD winter canoe along the Kalamazoo River took place.  According to reports this leisurely paddle in the dead of winter down the recently oiled, historically poisoned river was not with out incident.

With three people going in the water and a challenging kayak salvage, this trip was one to remember. A former NOLs instructor in the group stated that it was her first wilderness rescue operation...all that excitement a mere mile or two from Plainwell, Michigan.

The day after the FTD canoe and the DIY curling with the DAACC was the Bittersweet telemark fest- pins and pints. About 25 free healed freaks showed up.

and i freaking sucked


This map does not really do the hill justice- especially the summit of the sucker where the quad drops you off. The first 40 feet are incredibly steep..especially off the right side.

I took park in the Up/ down race on borrowed gear. This was the first time i have ever worn plastic boots, and had a ski of this caliber. So essentially i was skiing for survival. It was not a pretty sight. Thankfully, the other racers and participants took my lack of skill and pride gracefully. During the race i took my skis off and boot packed up the hill ( fell on my ass on the ice)...i came in 4th (i think) on the up...after getting my skis on...i decided on another unorthodox approach...or descent actually.  I stuck my skis in the air..and glissaded on my back the first 40 feet until the hill eased up a bit.

After all of this. I came home have needed about 2 days to recover. I am still pretty sore and could use a trip to the chiropractor.


Kalamazoo Proper got hit with this storm around 5pm or so. By 9pm all the side streets were covered with snow and a full on urban assault was made. Skiing from my door, down Main street off into the neighborhood. This was the Mouth of blizzard-zilla, consistent 25 mph winds, 40 mph gusts. Blowing snow, freezing temps and low visability- essentially perfect conditions to go on a urban backcountry nordic ski.

There was only one picture taken during this adventure, all the video was way too dark. There were 4 of us, we had fun.

Wow- video of my skiing really highlights that i am not very good, my form is kinda sketchy. I believe that video of my skating might make me looks similar.  Importantly- my lack of skill does not translate into lack of fun.

For you big mountain folks out there this place must look particularly pathetic- but for being a mere 10 minute ski from my house, being totally free, and in the middle of an urban area- it is rad.

The Chicago tribune has a large gallery of the aftermath of Blizzard-zilla on that city. Please note that there is more than one picture of people taking to the streets on skis- and there a few grumpy adults...but there are a lot more photos of kids having a great time. 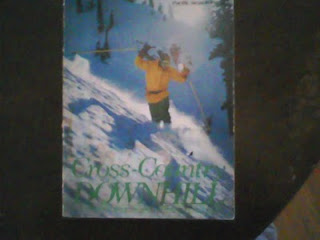 Posted by Unknown at 9:31 AM No comments:


On this sunny afternoon I had a lacky that towed me by bicycle repeatedly up the hill pictured above.

Took about a dozen runs down this smooth pavement.
Posted by Unknown at 7:11 PM No comments: